Skip to content
Home » Spilling the beans: we’re full of them

“Nah … às vezes, mas obrigado”,  Hugo replies when I ask him if he ever eats tremoços. I bought some for the photo but I don’t eat them. I find them a bit bland but they’re still very popular everywhere.

Hugo, all though portuguese, is too young to appreciate the tremoços. His father would know, and his grandparents for sure. In their time, this bean was a hugely popular snack in Portugal – in the whole of southern Europe, by the way. Spain and Italy also know it, and then as “altramuces” or “lupini”.

The last word shows the roots of this bean – lupini

And the photo below shows the plant. Isn’t that nice? Such brilliant colors, a beautiful classy flower, and then it also grows an edible bean? Wow, nature is brilliant and generous!

Anyone who has ever come across a lupine bean – in a large salt-water container in a rural Spanish supermarket, or in a little bowl in an old-fashioned pub in Portugal – knows that they stay fairly hard and the peels tough and bitter. You can easily grow them yourself in your vegetable garden. They’re also green fertilizers.*

But you better not confuse them with others if you pick those beans!

(In fact, you need to know what species you’re picking, because some are toxic. They contain bitter alkaloids that leave an extremely unpleasant taste in the mouth and can even affect the central nervous system.)

Now you shouldn’t eat the peel

Here in Portugal those beans are still popular. With a handy movement you pop the bean out of the peel in your mouth. Peel in the bowl, and if it is very cozy, there are a lot of peels around it.

It’s getting a little less popular because of course the new generation doesn’t want to do the things their grandparents did. They went to the café to drink an água-pé** and ate a bowl of tremoços.

We have tried to free ourselves from beans throughout the history of the world. In poor countries it’s still: rice with beans or beans with rice. Eating beans, that is / was the proof of poverty. Anyone who could afford it a little bit more immediately traded in the beans for meat to provide for their protein needs.

That was progress! From beans to a large piece of meat on your plate

Now we’re so overly saturated with those large pieces of meat that going back to the beans seems our only salvation. In fact, the best bean to turn our destiny (yes, it’s about climate change!) around is perhaps the most stubborn, obstinate, marginal one in the bean family. 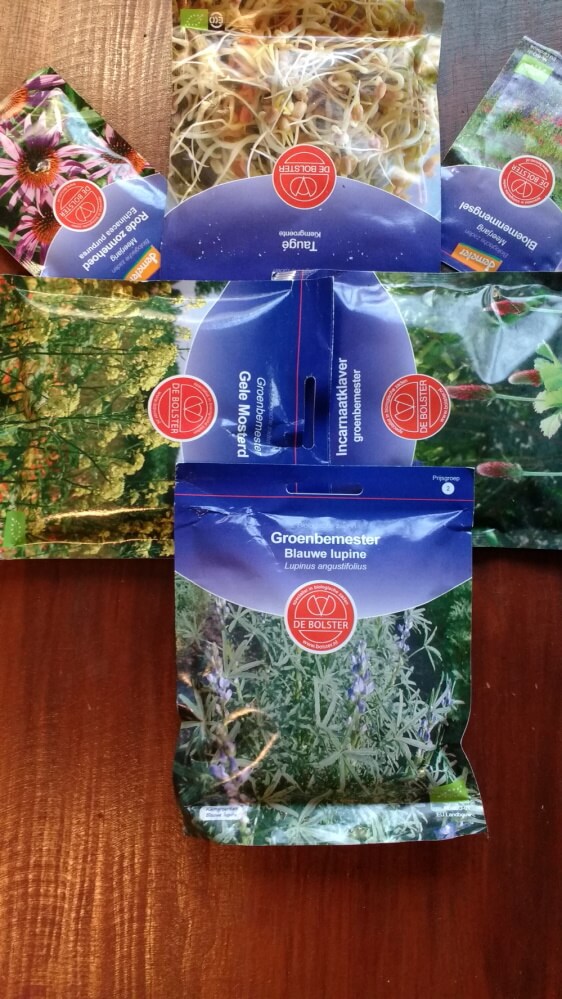 We have a little bag for sowing in early spring (about the end of February). It seemed a no-brainer, because butterflies, bees and bumble bees (such cute animals!) like those flowers very much. Perfect. Perhaps we will get some beans from it. And perhaps we will do something with them.

(Or if we pick the wrong one: “Fagioli lupini Terminal”.)

We shall see with those lupini.

* Green manure crops are crops that are sown outside of the season and enrich the soil with all sorts of substances (depending on which you choose of course ) so that you don’t need to use as much fertilizer.