Skip to content
Home » B & B with flowering vegetable garden

We had an unexpectedly visitor (happens a lot, especially for the B & B part): a single lady who liked to do something with her hands. “You know, all good and well, being free and able to do whatever you want, but I like to do something – in the garden for example. I love gardening.”

Sandra was sent from heaven, I suspect.

There were plans for a small expansion of the vegetable garden …

… and we would do that in September. Perhaps you know it, dear reader, that time that flies and so on …  and that they only put 24 hours in a day, of which at least half you don’t want to do anything or sleep. So it was a bit later, but not bad because the temperatures are still on the high side. 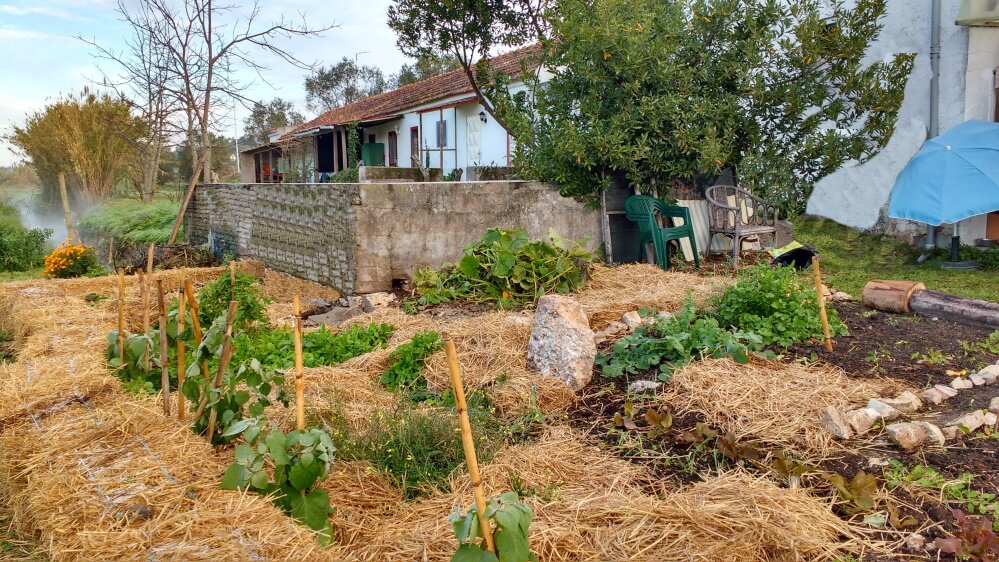 The plants think this is great, at least! After Sandra’s visit – who made quite a few meters with pulling out weeds and grass, and made a nice area cultivable – the transplanted physalis is radiant, the celery babies grow up healthy, and the lettuce plants make leaf after leaf after leaf.

We even discovered a bed of spontaneously grown spinach among the weeds!

Everything grows and blooms in winter. The salsa plants (salsa = parsley) have formed a conspiracy, and have plans to take over the herb garden, but the curly parsley and the chives resist in a non-violent way. The sage stands separately, protected in an open greenhouse, because sage only wants heat and preferably a little sandy or rocky.

We can’t offer her that – the soil is heavy clay, and you can’t call it hot at the moment. Yet it bravely stands, next to the peppermint (who’s miserable) and the coentros from the supermarket. Coentros is coriander – very tasty to enrich your salad!

Sandra thought that was a filthy idea (people like coriander or they hate it, there’s no middle apparently) and would rather stick to the arugula

“Look, that big one, that’s arugula-A,” she points out, “those little leaves are also arugula, tastes a little different, but I’d rather use that big one.” She looks at me with a generous bunch of arugula-A in her hand. “It’s quicker”, she adds with a naughty smile.

The beauty of all these plants is that they maintain themselves and sow themselves out to everywhere. The only challenge that remains now is the wind. Termas-da-Azenha is that far from the coast, so you often have a western wind. And plants survive a lot, but most of them don’t like wind.

Me neither, but what do you do about it?

Broes and I – Broes is the instigator of all this; it was his idea, the expansion of the vegetable garden – eventually came up with posts with sheep’s wire and plastic. Wire to make it sturdy, but of course you can’t leave it at that, because the wind just blows through it. (just joking)

You can nicely grow your peas, tomatoes and beans on the wire. And then plastic to make it windproof.

Nice plan. Now the execution … a lot of time was spent collecting courage because it’s quite a job, digging all those holes and hammering those piles into the ground.

And it was not windy at all. So yes, the need to do something about it is nil. Suddenly the ultimate Golden Idea came down: why don’t we use the remaining straw bales?*

Aha! What a great plan. That’s a win-win-win – maybe even another win!

The straw bales are used, the wind is stopped, that stuff decays and is food for the plants, and (yes, another win!) it’s mulch. Mulch is finely chopped garden waste, leaves, coarse sawdust, or straw so that you scatter among the plants, so that weeds are discouraged. (STRAWberries, right?) And snails. And caterpillars.

And now with that chicken … if you come to eat next summer, you will probably get everything freshly laid and organically grown! We can call that an extra attraction, right? 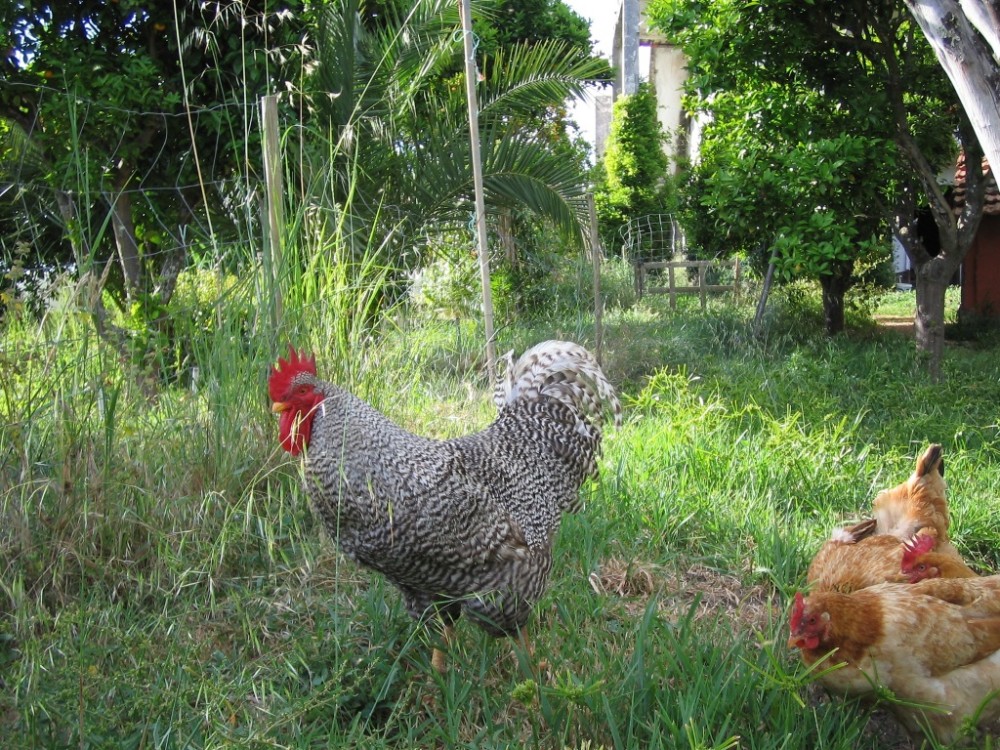 ……….* The straw bales are left over from the donkeys. Once a year we bought a huge pile, but then the …………last donkey died a year ago in October. So there still is a pyramid of straw.