Skip to content
Home » Card tournament: the cards are shuffled

You regularly see people play cards when you go to a café.

Now the café visit has decreased a lot, and I don’t get there too often, but if – then almost standard people are playing cards.

I did a lot of playing cards myself, 20 years ago. That was in the beginning, when we were refurbishing with a small team here. It seems as if it belongs together: remodeling and playing cards.

And you play cards with your children, of course you do that too – if you really can’t get out of it

Now I was not the best card player of all time, there was even someone who had a lot of fun after the game, said that he had played the trump card (!) 3 times in the same game, and I hadn’t even noticed. My partner also not, by the way.

I don’t belong to the group who’re counting, remembering everything that’s been played, and playing to win. I play more to chat, to have fun. I certainly don’t belong at this tournament, which is organized here in the neighborhood.

I suddenly saw it hanging when I came to the bakery: a card tournament

Nothing special, you might say, though: maybe in these digital times. There may be thousands of people playing online, but “live” it doesn’t happen as much as before.

No, nothing special, until I saw the prices.

Grand prize: a pig. Second: a ram. A sheep, piglet, goat, 2roosters, and so on 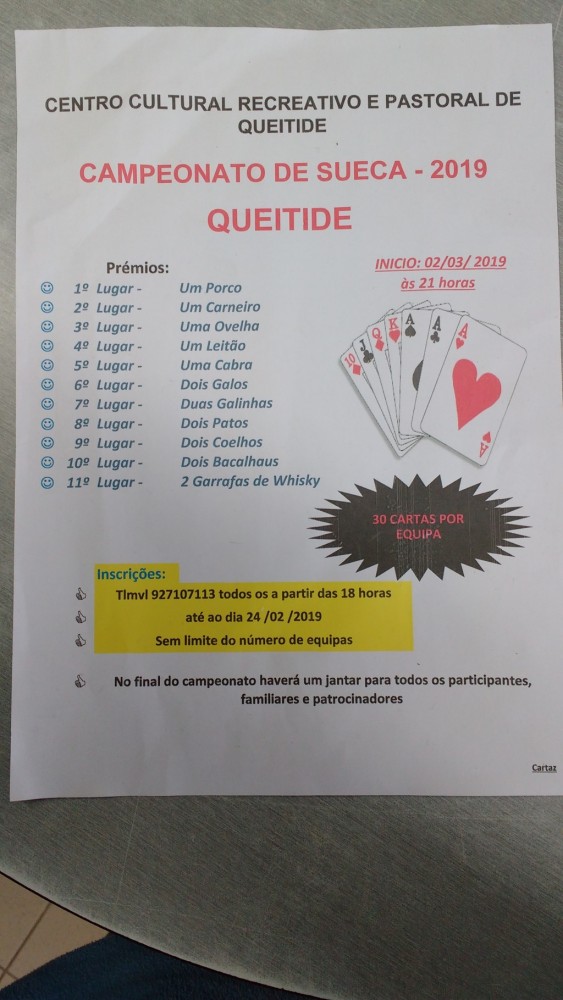 I would love to win a pig! It’s all about living animals! The only things that are not alive, are the bacalhau and the whiskey. For the rest, you can win a whole farm there. I thought that was special!