Nobody knows how many times it has been. We’ve all lost count in all those years that we’ve been living here in Termas-da-Azenha. And it’s all caused by fear.

Fear of flying, that is what’s up

My brother doesn’t like to fly. Many more people have that (maybe they’ll save our planet because of it). He solved it very simply when we emigrated: he bought a red van. It has since become The Red Van – the Rotterdam – Azenha service, without a timetable but with a whole stevedoring team. 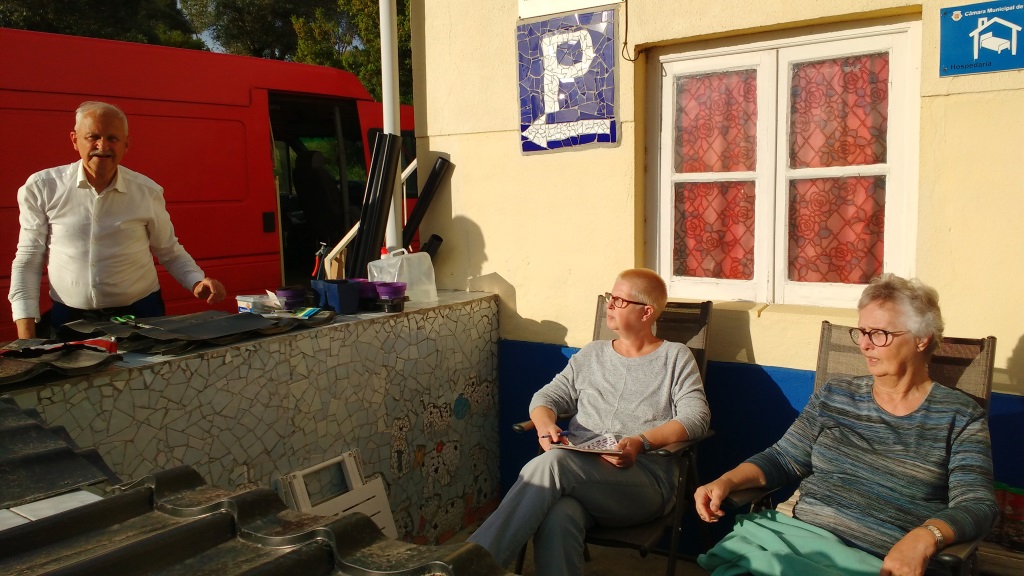 He came the second year we were here with a van full of memories of our mother, who had died shortly before.

Those things are still scattered throughout our village, just like the next loads, because the Red Van has already been driven back and forth countless times. Fully loaded with useful things such as peanut butter, indonesian food, dressers and couches, but there was also a piano, and a real water pump with 800 liter capacity.

In recent years, the RV usually rides in April, the nicest month of the year

Just a pity that the weather isn’t completely stable in April, despite the beauty of fireflies, starry skies and the scent of orange blossom and eucalyptus. The first week, the family had to deal with with rain and cold-for-the-time-of-the-year.

Fortunately it was a wonderful weather the second week!

I found that very pleasant, because that way they could also have breakfast and / or read in the sun. We come from a family of readers, so books / e-readers are a basic condition for survival. I also found it very pleasant because we are also from a family who like to do stuff.

There were other guests, an ex-volunteer with her family, campers and a group of students with supervisors.

The latter had booked half board. Breakfast is not that hard, but dinner is a different story. My sisters took matters in hand, peeled potatoes (you don’t feed students pasta – they make that themselves all the time) and did the dishes.

In the meantime, my brother provided the entrance with a whole battery of lavender plants and carnations, weeded the Butterfly Garden and sown even more tasty flowers (tasty for butterflies & bees), planted the Golden Rain (which seems to be happy). My sisters sewn curtains, cleaned their own rooms … too much to mention!

I’m blessed with such a family. As Julie Andrews once sang: “… for somewhere in my youth or childhood … I must have done something good …” – otherwise they would never do that?

If you ever have to face the choice: the position of the youngest in a large family is a Golden Choice! I can heartily recommend it!