But it’s a mess. The last users of the FancyDressingRoom didn’t commit to Rule Number One: Leave the FDR nicely for the next ones. We agree on that everyone is hanging the clothes back neatly, and put the shoes back in the rack. That’s normally not so easy for children, and usually they’re helped by their parents. Most of the time it’s put there a bit sloppy, but when it’s hanging already, it’s faster to correct than when everything’s lying on the ground.

So I’m grumbling a bit while I hang all glitter dresses and put the high heels in the rack.

All dolled up with nice clothes in the Fancy Dressing Room

“Oh why is everything on the floor now?” a clear voice asks suddenly at the entrance, “What a pity! Hey, there’s my dress!” I am pleasantly surprised, this is a girl who’s always complied to the deal we made and has a lot of fun in dressing. She can do the same things like me, with thát dress on thát hanger and thát blouse there: “Than the colours are matching.”

She plays the game straight away, grabs a hat and answer: “I’m going to dress up, Mrs Donuts, because I want to write a story.”
“Oh, how nice,” I say with my normal voice, “Do you write stories? Me too.”

And there I suddenly get an order

“Ha, then you have to write a story for me,” she commands, “it has to cover a gnome.”
“Oh, easy,” I say immediately, “We’ve got tons of those here, I just saw one hide under that plant just outside the door. I think they’ve done my dishes just now.”
She laughs: “Then they’ve to come to our house, because my dad doesn’t like that there is no dishwasher. He says: why do I have to do this, I have 2 dishwashers! But we are still too small.”

“Oh, you’re kidding!” I say, “Do you know how small gnomes are?”
“Yes, sure, so big,” and she starts with her hand next to her shoulder, but with my disbelieving face she goes down next to her knee. “I’ve seen them here too! And now my story!” 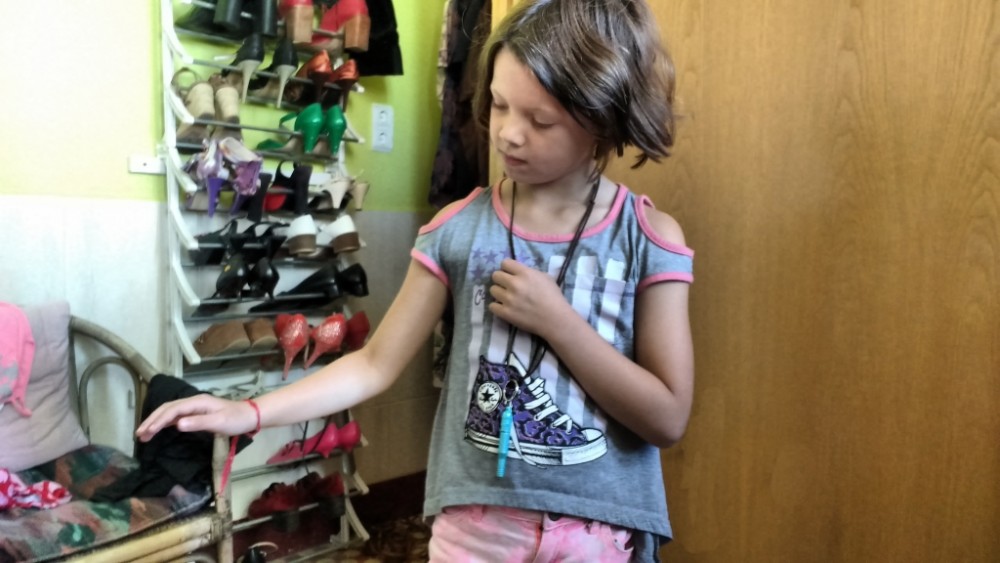 I say, “I think they’ve had a meeting here recently, to talk about whether they’re going to continue to help people or not. There are too many people and children who do not even believe they exist. And there’re a lot of people who own those robots. ”
“Oh, such a hoover that is cleaning by itself! We have that one at home! And our cat loves it!” she claps her hands with enthusiasm, “I don’t like that people don’t believe in gnomes. But they don’t come to our house now, can you ask them?”

“Robots or gnomes, it’s one of the two,” I say, “that’s maybe bad news, but that was the outcome of their meeting.”
“Uh, oh, she looks to the ground thinking, and comes up with the solution:” Maybe they could do just like our cat, and play with it …. drive around the room at night, maybe they might just like to make fun? Like our cat? ”

I think it’s a genius idea

“I’ll write it on a letter with goblet ink and leave it in a jar at the place of their gathering,” I smile, “let’s see what they do. What do you think?”
“Surely they’ll do it,” she confidently says, “if I was a gnome, I would do that, but it is a secret.”

Resolved perfectly. Reality and fantasy stuck together. Thank you, girlfriend!