Skip to content
Home » Portuguese are machismo – or am I wrong?

Yeah, well, I can’t help it that my voice sounds quite sarcastic … “Eh … don’t mention it, senhor!”

He came driving up, and could turn right right before me. He doesn’t have to stop and I just have to refrain a bit. With a little attention, it all goes by itself. Officially I’m on the main road, but I really like courtesy in traffic. He may go before me; so I go a bit slower and gesture that he can go.

But unfortunately. It’s an older man

Men don’t take priority from women. Portuguese are rather macho, but in a very modest way. Especially the elderly. We would now call it sexist, were it not, that most women also participate in this game – so it’s not so much sexist but just old-fashioned, actually.

We were sitting on the beach, it was October, rather unusual to lie in the sand in the sun. We were not used to that. Full belly, good mood, cozy conversation, funny jokes, beautiful plans for the future, harmonious silence, everything perfect.

The only small minus was a hangglider with an outboard engine. They were en vogue just then. They were two, and flew over our heads, a few kilometers in one direction, and then back again.

Tjesis, what a senseless activity! Go lie in the sand, you rascals! Then you don’t make any annoying noise either!

Irritating, it’s like an annoying housefly around your head. Anyway, we were the only ones you could see in miles, so yes … those rich brats don’t take that in consideration, of course. (In order to do such things you had to be part of the better classes at the time, because the middle class was still in its infancy.)

One disappeared behind the dune. Hey, one out

But the other one landed very close to the water line, a good distance away from us. His parachute landed in the surf, and he was immediately enshrined in the water, because everything was still hanging on him.

I saw that things were not going well, jumped up, and ran towards him as fast as I could.

By the time I was with him, the surf had already taken him away a fair bit

I grabbed him by his outboard engine, which was still hanging on his back, but the only thing I could do was put my heels in the sand and hang in there with my entire weight. The strength of the ocean was far too strong to drag him out.

He also braced himself of course, and meanwhile tried to pull the ropes of the parachute towards him. That parachute caught a lot of water. Meanwhile, my-now-ex arrived also – he was built somewhat heavier – and also picked up the ropes. But he too was not strong enough to get anything to the beach. 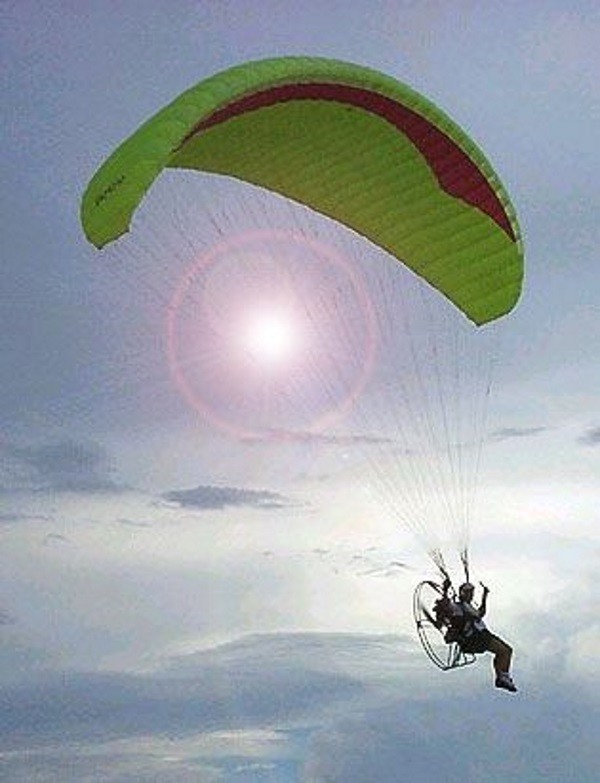 There we were with the three of us, to our waist in the water, impossible to get away

Thank God someone had seen it, and got help. A tractor arrived – they normally bring the nets full of fish inside with those tractors. Once everything was hooked on, it went well quickly.

Of course there were also a lot of people, suddenly, out of nowhere, and everyone tried to see as much as possible, walked, talked, and pointed fingers at us.

We didn’t understand a word, whilst speaking just a few words Portuguese.

We just stood there a bit. Shaking. Okay, all’s well that ends well, let’s go then

But what I’ve always found very striking is that the parachute man didn’t say a word to me, didn’t look at me and ignored me completely. It surprised me, because the Portuguese are very polite and formal, it had been quite normal if he had thanked me for the rescue.

At the end of the day, if I hadn’t started hanging on his motor, he’d already been halfway through America. Or to Neptunes’ kingdom.

Oh, well, what do I know about it?

Flying or driving – sometimes they’re something different, huh, those machos! Don’t you think?