All of a sudden I sit here as an informal caregiver for a pirate chicken on one leg!

Strange things sometimes happen in Termas-da-Azenha. My son Broes and I walked to “the little houses” (next to the ElephantHouse is a refurbishment that serves as storage for anything and everything) to get something, when unexpectedly we saw a chicken lay in the grass.

A real live chicken. With a panickey look in her eyes and her feathers all messed up

Aah! Hello you poor dear! How did you get here? Who? What? How? And especially: why?

I have a vague idea. It must have something to do with a dog. I thought I just saw the shadow of a tail disappear around the corner. Not really paying attention of course, because not prepared to find a chicken at my feet. Anyway, something had to happen here, because you don’t just step over the animal and go on to do your thingy.

Moreover, we had already forgotten the thingy we were going to do, so I carefully picked her up.

You don’t have to be afraid of a chicken, because they don’t bite. That’s for sure

Always loved chickens. They are so cozy. If they’re clucking softly among themselves; or if they loudly singing out their joy over a (finally!) laid egg; if they take a sand bath or if they run away for a rooster with obvious intentions – they’re cute and give you the idea that life is good.

Just. Good. No more. But back to the reality: there’s a chicken in my arms!

Fortunately we still have enough straw. And we still have a cot that, conversely, can serve as a henhouse. It looks like she hasn’t been damaged very badly. I bought chicken food at the grocery store in Vinha da Rainha, and asked on the way at the cafe and at the pastelaria if someone had accidentally lost a chicken.

No one. So far, no one has reported him- or herself as the rightful owner, so Chickie Carolina has been in her cot for a week. She has recovered well, but her right leg doesn’t want to do what it has to. I carefully checked, but there’s no broken bones or something else obviously wrong. We do physiotherapy together every day, when I have breakfast on the terrace behind the kitchen.

Chickie Carolina is studying for flamingo 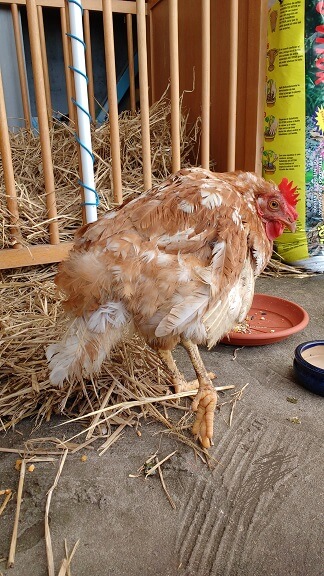 I try to talk cackle with her, but she’s the silent type. And I suspect that my cackling is not very good, because I regularly see her frowning when I try to say something. Yes, chickens can frown! Their eyes may be turned upside down in their heads (look carefully, they close their lower eyelids; the upper ones stay in place), but they can express all kinds of emotions.

If you now feel inspired and want a few chickens, here are a few things that are useful to know:

I say: every depressed person a few chickens, and Big Pharma’s lost an important branch of its business in one fell swoop. It is impossible to stay depressed if there are a few chickens nearby. (Roosters aren’t necessary, by the way, so you can avoid that annoying cock-a-doodle-doo.)

I’m going to do physio again with my chickie. See y’all next week!