I am sitting here rejoicing behind my “new” PC.

All computers were broken! Well, not all, but first the laptop, then the desktop. Man, that was a nice surprise, but-not-really. The laptop refused to do anything anymore start of the evening.

Never a good sign, if something starts ticking, certainly not for computers. Crisis?

And after ticking for an hour, he quit quietly. Just like that. Without warning or nothing. Passed away. Dead. Nothing more to do.

You’re surprised by that, can you imagine?

What does a person do in such a case?

This person immediately calls for help from behind the “Iron Curtain”. In the reception hangs a curtain, where the work computer is stationed (and me as well). Behind the “Iron Curtain” has always been the domain of “the boys”. My two boys, plus friends. There were about 5 boys sitting at a long table for years, and the reason for that curtain seems very clear, especially for people who also have children: it was a pigsty. 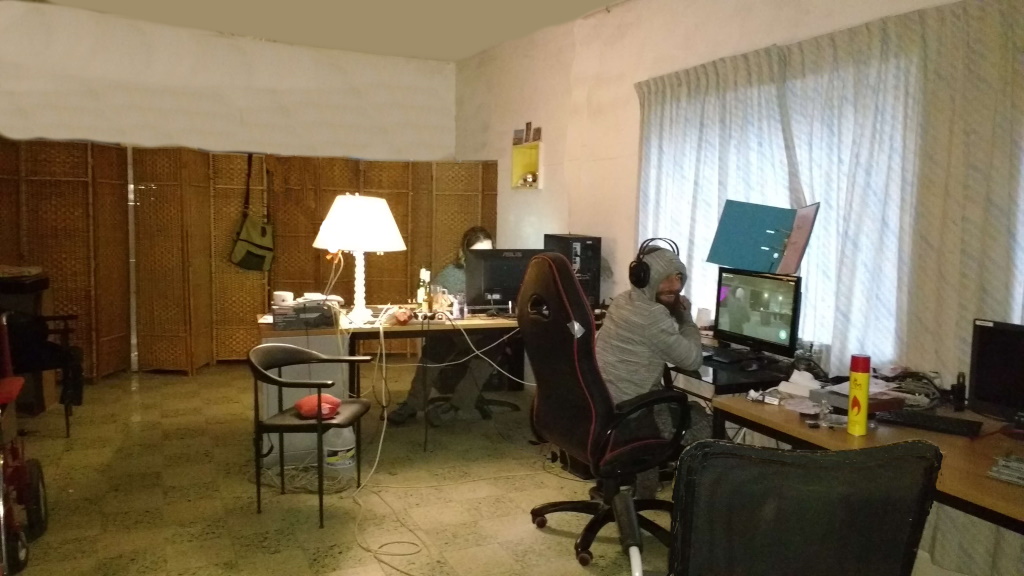 It is now slightly better. There are now only 2, sometimes 3 boys (and well, they’re not boys anymore, they’re in their mid-twenties). That makes a difference.

Anyway, if there’s something with my computers that I can’t solve myself, I call in help from behind the Iron Curtain. Son Broes emerged sighing, muttering incomprehensible things about morons of mothers who don’t know anything about … but soon had to admit that there was Force Majeure here.

My work computer was assembled by Hugo, who’s been living here for years. One of the 5 boys. Hugo has been messing around for as long as we know him with mopeds, cars, computers, and all kinds of electrical appliances. If something crashes, his name quickly comes up.

Very handy to have him around, especially in connection with a computer crisis!

The diagnosis was quickly made. We have a somewhat unstable electricity network here, mostly above ground, and that causes peaks and troughs. The failure is taken care of by my UPS because computers don’t like to be turned off without the proper procedures. It deals with most failures.

But the contrary – overload – is much more difficult to handle. It sometimes happens that lightning strikes the network. We don’t often have a thunderstorm here, but when that happens, it can happen that it hits. You can’t do much to prevend that.

Well, long story short: that was it. And dust. And wear (he was already 4 years old – that’s about 136 in computer years)

The bad thing is that I last backed up in June. So from this summer everything is gone. “We can do something about it,” Hugo said cheerfully, “I can put two SSDs in it, then it automatically backs up. And the laptop gets a new hard disk.” That made me a little more cheerful, because such a shame that all the photos from the summer are gone!

The SSDs plus hard disk were ordered from PCDiga. Guaranteed delivery after 24 hours. Top!

Small recoil: the SSDs were mounted, but then the powersupply also failed. Hm. Same tune: order, wait hopefully. Then, when the whole thing could run again, the fan was labeled as (s)crap, better to put a new one. “Otherwise it will catch fire within half an hour.”

I don’t know what they thought at PCDiga …

Anyway, ends well, all’s well. I’m rejoicing. Laptop works again, desktop works again, and The-One-Beside-Me also got a new fan, because it started ticking – to make it all more exciting – too. Exactly at the time that it was the only working computer (at least, one that falls under my authority, because I may not even get in the neighbourhood of the boys’ computers).

I’m happy. Just. That. What does a person do without a computer nowadays?