Everybody comes in at the same time. I sit fairly in front, because I was just a little late, and the room was already half full. Very glad that I had taken the trouble to buy a ticket in advance. There was a long line in front of the counter, so I could walk straight through the courtyard up to “O grande auditório”.

There you go somewhere, or what?

The performance started a bit later because it was sold out. I was able to see how everyone came in, and I was actually surprised about the habit of the average visitor. All people in dark winter clothing, the coats still on. All with an inner color, because well, it is also cold in winter. 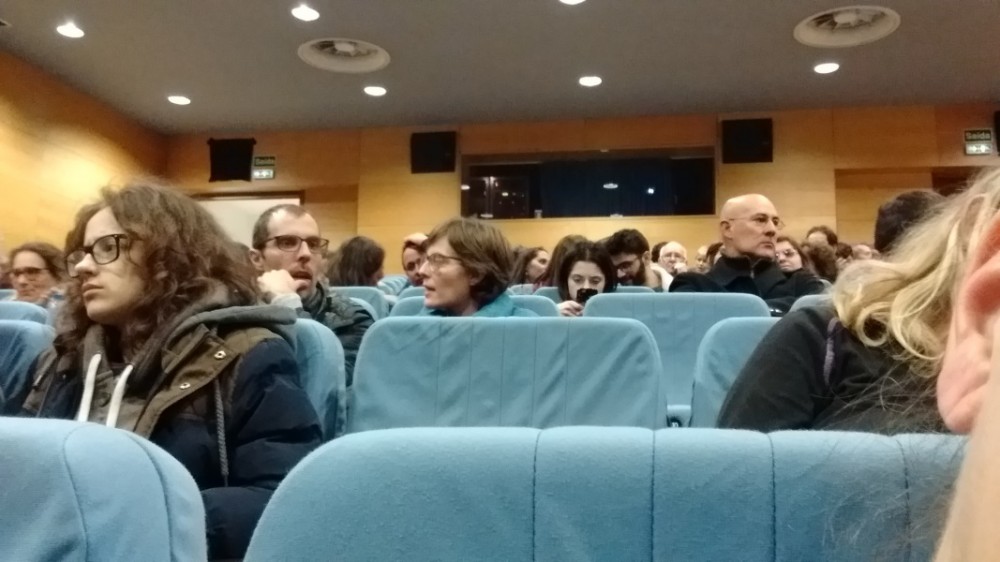 A group of teenagers, mostly girls with a few boys in between, filled the first row. Assignment for school? A square shaped little woman with light bleached hair and a rabbit fur coat was looking for a spot on the second with her equally square shaped man. I was sitting alone, a few young women with some chairs between us on the same row, and a few moments later another woman was just looking for a place between us.

There was a pleasant buzz. The group next to me greeted a befriended couple, and secretly whispered to each other when a woman with short bright blue dyed hair came in a bit further away. These are city people and art lovers, but blue dyed hair is still just quite special.

The lights go out, and everyone shifts with anticipation in an easy position

I am not at the optimal position, the level of my increasing blindness taken into account. Just too far to see it completely sharp, just too close to put on my magnifying glasses. Doesn’t matter, I can understand it, so I don’t have to read the portuguese subtitles. The rest is fine.

I’m immediately sucked into the moving brush strokes that are so typical of Van Gogh. From the beginning, I’m looking at all that splendor with open mouth so to speak. It is so beautifully done, the painted scenes alternate very easily with the gray,er live acted pieces.

The film is in any case colorful 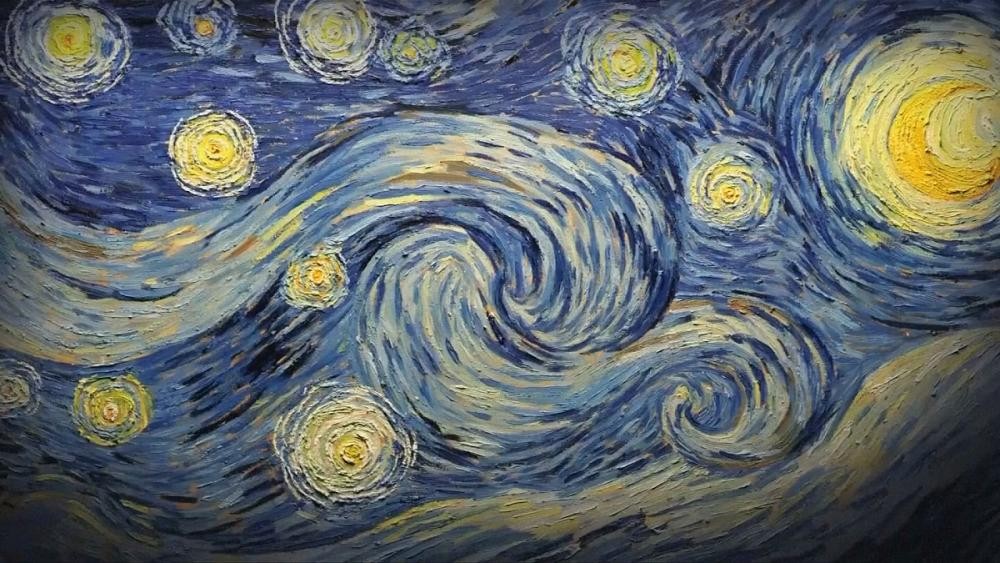 The protagonist is a young man, the son of a venarable postmaster, whose beautifully painted beard and meekness commands immense respect, who have to deliver Vincent’s last letter to his brother Theo. That’s quite an adventure, because on the way he learns about all kinds of things.

He’s sucked into the story, just like me. I will not give anything away, because if you have not seen it yet, I can heartily recommend it. And if you did, you know what I’m talking about.

Halfway through the film, tears were in my eyes, and I was glad I had a handkerchief with me. The most impressing was the daughter of the doctor, the only one who saw the genius of the painter during his lifetime. That is why every day she puts flowers on his grave, in homage to an artist who was recognized as a genius much, much later.

If a tree falls over in the forest, and nobody sees it, has it really happened?

If nobody sees your genius, acknowledges your efforts, appreciates your life’s work, is it there? Vincent van Gogh was a nervously tormented man, but with a bright connection to the other world. The world of light and love. Who would understand that?