Skip to content
Home » A tour to the supermarket (part 2)

Last week I wrote about my little tour to the supermarket, caused by my hunger for something special.

It resulted in a delicious meal, which our guests also enjoyed very much. I had made a spinach quiche for the real vegetarians amongst them, and of course some side dishes.

It was fine, really good, they said

But the tour caused not only a delicious meal for them (and for me) but also something else.

I like to watch YouTube videos, especially as the end of a busy day. These are often video clips by Stephen Colbert for instance. Good jokes, and you immediately know what’s going on in the world. Very nice. I love to combine things.

And then you stumble upon something

Suddenly I was watching an interview with Tony Robbins – a name that sounded vaguely familiar. I read about a meeting with him in the book of Suzan …. about introverts “Quiet”. A meeting with this man would be a life-changing experience – yeahyeah, I think cynically, he becomes a billionaire! That’s probably very life-changing …  for him!

But hey, I was prejudiced, it was a very sympathetic energetic passionate man, with a beautiful story and honesty in his eyes. He was grateful for everything he had. Grateful, you hear more and more people about it.

Be happy with what you have, from time to time realize what wonderful things you have in your life

No, not that nice new e-bike or your idiot i-phone – not that. More along the lines of: the look in the eyes of your daughter when she learns roller skating, or the unexpected help of an unknown passerby when you’re struggling with your hands full at the front door, or the spontaneous smile of the cashier at the supermarket. That you have good eyes, so that you can insert your thread into the needle without any problems. That you can hear the frogs in the pond. Simple, those little things that make you happy.

I got into the car to drive to the supermarket of Jorge Neto for my snack, and drove through my beautiful landscape, nice & slow, in the February sun, with a view on two shiney storks walking through the fields.

How beautiful can it be? 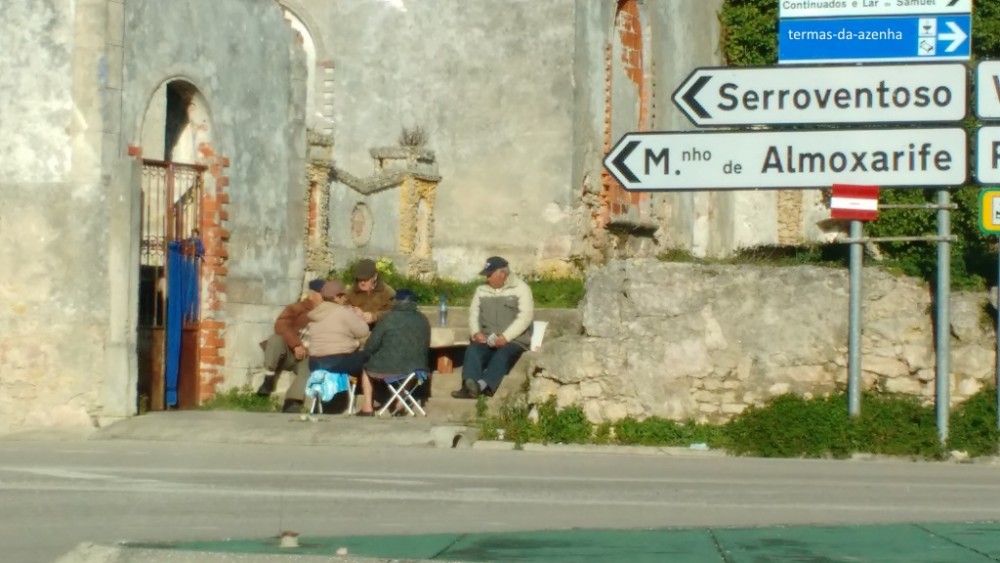 I saw a group of elderly people sitting comfortably in the sun on a sheltered spot. I took a photo secretly, I would rather not disturb them. The ruins of Amieira is a popular place to picnic – Portuguese people like to do that much, and everywhere – and in the summer the small pool next to the ruins is always full.

They were sitting there enjoying the sun, protected from the wind, they brought their table and chairs and a pack of cards. They were playing cards together.

That gives you a smile, doesn’t it?

A little further away was a large pile of eucalyptus stems and large mounds of earth. I had seen that earth before, but now there was someone –  I could ask something! I’m interested in dirt; we have some holes to fill, I could use a truckload or two.

It smelled great of eucalyptus, but it was also very dusty. I walked around the truck to see if I could attract the operator’s attention, and yes … but the engine was making too much noise and it was too high to just ask him something.

No problem. The man turned off the engine, climbed down, shook my hand and listened to me with a smile. He explained that it was not earth, but biomass, and filled with roots of brambles and reeds. 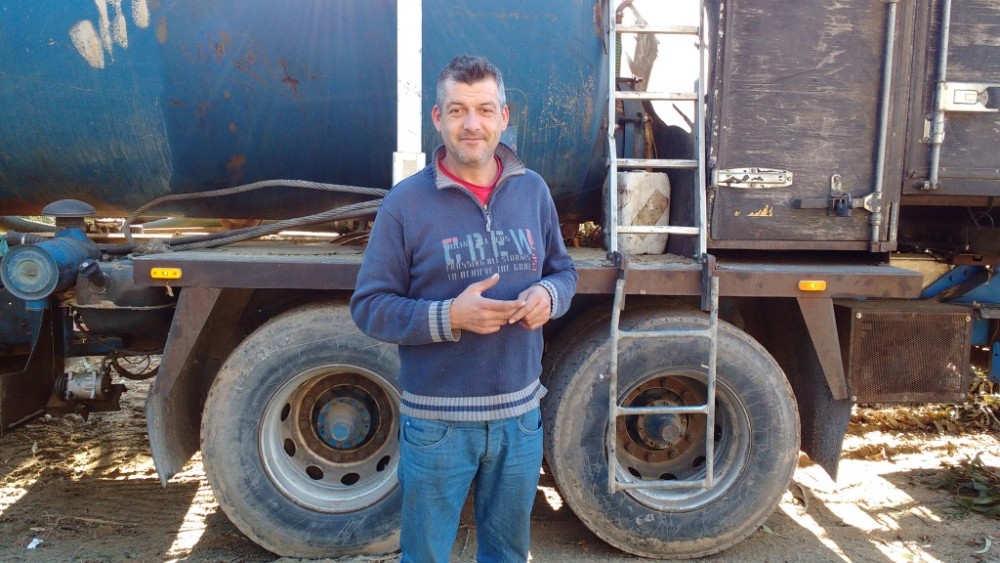 “Oops, we just took them out!” I cried laughing, “nono, so this isn’t suitable anyway!”

He quietly took the time for it: “You are the one of the Termas, right?”

It can be that simple. A nice drive, someone who takes the time talking to you, seeing some people having a good time – you can find that very often here in Portugal. I maybe don’t even realize how much effect it has on your life.

Thank you Portuguese, for giving the good example! Nothing wrong with that, being nice to your fellow (human) beings!