Skip to content
Home » … comes a dog at the doctor’s …

She sneaks away when she sees me coming. We won’t fall for that again – be very nice and kind, and then suddenly put you in a closed space that moves, and makes you extremely nervous and a bit sick. So scary! You don’t know what will happen. Those people are unpredictable. 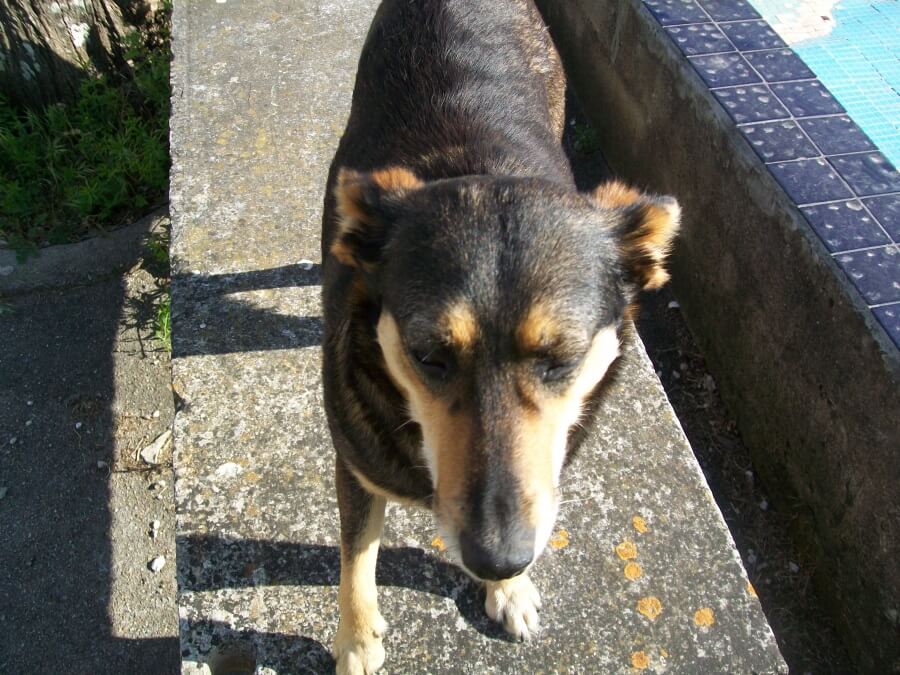 One moment they are friendly and kind to you, the next they grab you in your neck. Or you just walk somewhere, and you’re chased away. Or they put you on a chain. Or try to poison you. Everything is possible with those creatures on two legs.

It is in the DNA of animals, and especially Portuguese dogs, that you have to be very careful with people

I didn’t grab her for nothing: we’re going to the vet. Dr. Soares is the vet of the municipality, and a very kind and nice man. But she doesn’t know that yet. 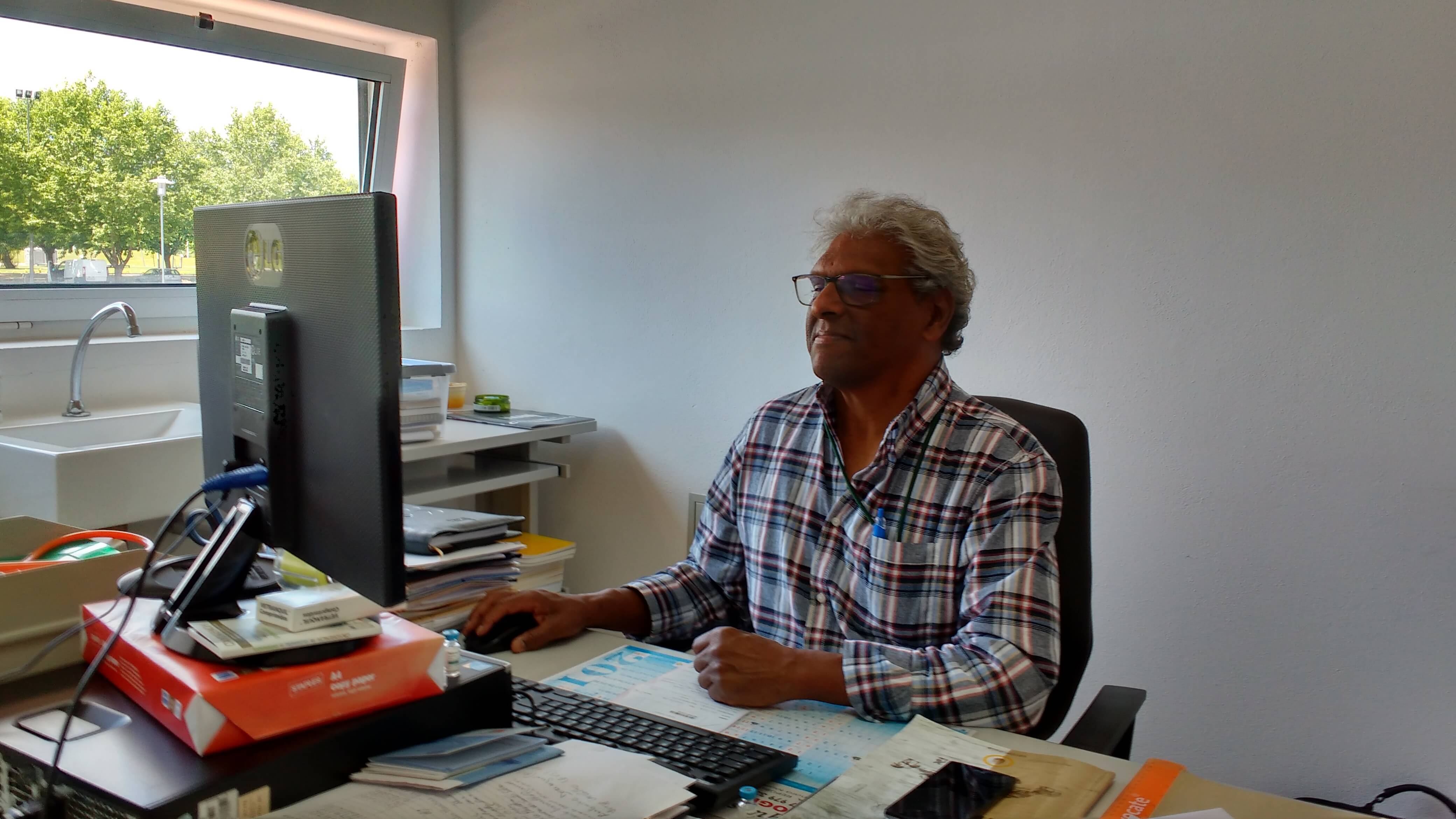 She is shivering in the back.

With all those animals in the Termas – donkeys, cats and dogs in particular – I have seen quite a few veterinarians up close. From most of them, sorry to say, I have the impression that they’ve started to practice the profession not so much because of animal love, but more because you can earn nicely. Especially if you sell the medication with it. Some seem to be representatives of the pharmaceutical industry.

Now some dogs were not very good condition when I arrived

One in particular wasn’t very attractive – we called him Wolf, because he had a wolf’s head. That sounds nice, but the rest was a sheep, with very thick fur. Below he had the pink skin of a pig, one blue and one brown eye, and he was stupid as anything.

He probably had been chained all his life, because he had a piece of broken rope around his neck when I met him. At that moment I drove at full speed to trainstation Bifurcação de Lares to bring someone to the train, and when I saw him, I already knew that I couldn’t drive past him again on the way back. 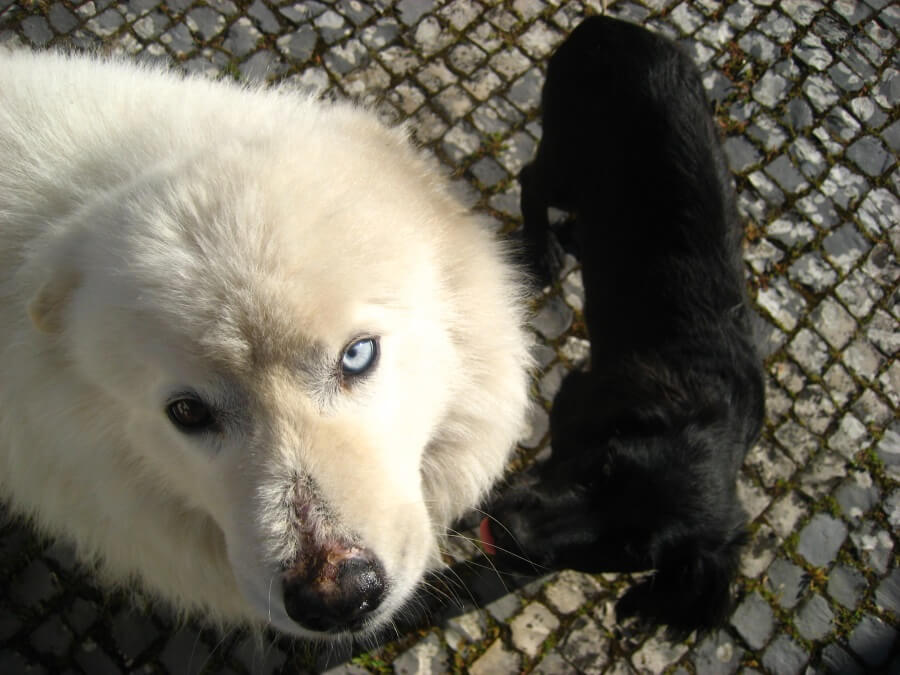 You come across some pathetic creatures, but this was one of the worst

It was a warm July day, and he walked completely mad with his thick sheepskin down the road. He was completely lost, literally and figuratively, but he was not agressive at all.

I went to see a number of veterinarians with him, along with my sister, who has impressive medical knowledge and said that a veterinarian could simply cut the ear a bit and sew it up again neatly. That would cure it. But all the vets looked at Wolf as if they saw an ebola-patient, and refused to even touch him. It wasn’t that bad anymore – we had already given him a bath.

Once, we even found a puppy in the garbage container! Surely a surprise, if you want to throw your garbage bag away, and a few adorable little eyes look up at you. We don’t want puppies anymore. It happened a few times, very cute and very sweet, but you have a lot of work with it. 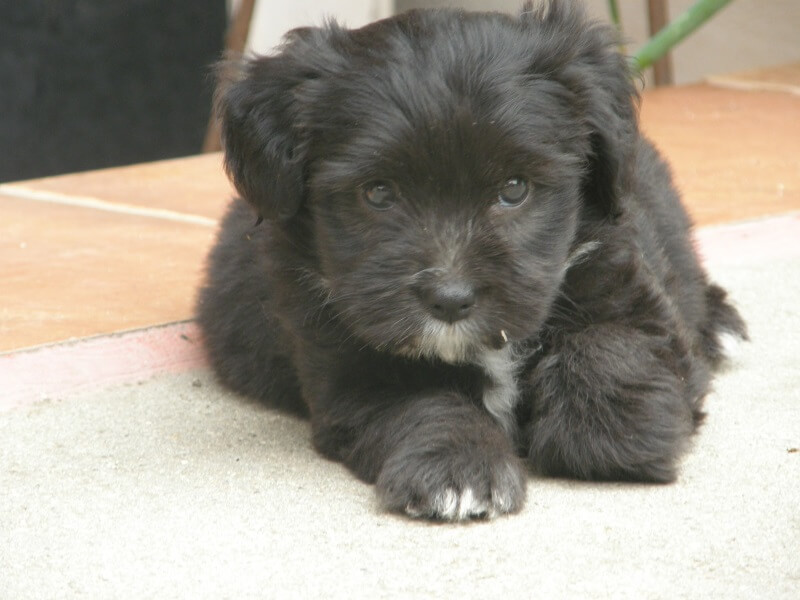 The last few years it has become less, all those lost dogs

Much more information is given, there is better care, and you can go to the municipal veterinarian if you want to adopt a lost dog or cat. Then the mandatory chip, passport and vaccination package costs little. Anyone can afford that, but you will be screened.

Logical, otherwise you’ll have many more cases of: “Comes a dog at the doctor’s …”

We moved here in 2000 from Rotterdam, Holland to the Termas-da-Azenha, Portugal. A big step, especially with two small children. We are busy to rebuild one of portugals cultural heirlooms: Termas-da-Azenha, an old spa which has been turned into several holiday homes, rooms and campsites, with a lots of fun things to do: swimming pool, indoor and outdoor games like pingpong, petanque, a FancyDressingRoom and a small café. You’ll find mosaics and paintings everywhere.

On Sunday morning we publish it on our Facebook Page, on Pinterest, and on monday on LinkedIn.