Skip to content
Home » Wanted: a house to arrange in the Algarve

Paul is an old friend who pops by every now and then. We know each other from the renovation of one of the holiday homes where he has been of inestimable value. I always call him “Paulie” because during that renovation in 2013 he talked a lot about the movie “The Godfather”.

“That’s a classic, you really have to see it”,

he told me passionately, “it is often referred to, and if you don’t know that film, you’ll miss things.”

“Yes, but”, I countered, “I started watching it once, and then something was wrong with the scard cable, and everyone was blue. I tried, but I really didn’t like the smurf version of The Godfather at all.” The nickname “Paulie” has remained. And now I also know what it is about when there is reference to a horse’s head in your bed. (Shht! I’ve never managed to finish that wretched movie …)

Every now and then we exchange an app, or I suddenly receive a pendrive with a film or a series or a book – something Paulie thinks I should have seen or read. I have read Mary Trump’s book, seen Fargo, and I have all of Eddie Izzard’s shows on a stick.

Last week I found a message on the app:

“Hello Ellen, I am in the far north tomorrow, would it be convenient if I pay you and chef Broes a visit in the company of my Dacia?” 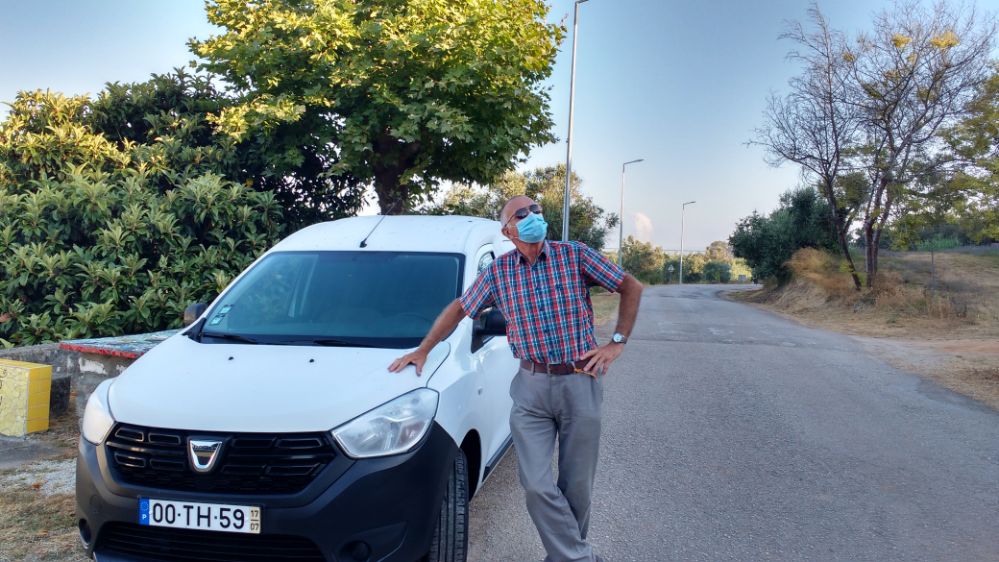 Of course! Guestroom 2 is free, so it was put in order in no time, and “chef Broes” has no objections about making a little more fish stew. The next morning I suggest he’d stay a little longer – until Sunday, so that he has 5 quiet days.

Looking for a house (preferably in the Algarve)

He lives in the Alentejo, near a campsite where he ended up after us, in a house in the middle of nothing, but a semi-detached house. The neighboring house was recently sold and is now being renovated. And that means that there are two people at work, who not only make heavy construction noise, but also have the radio on all day long.

“What?” I respond surprised, “how strange, that is not at all portuguese.

I have never seen a Portuguese construction worker play the radio very loud.” “Yeah, that’s because they are Brazilian”, replies Paulie, “and they’re young – so their level of noise tolerance is much higher then mine.”

Now Paulie is just like me – someone with a tense nervous system, who cannot tolerate loud noises. In his previous house in the Alentejo he walked all day with earplugs, over them an old headset, with the television on Real Loud, because all (chained) dogs were barking all day in that village.

I get that. Barking dogs and screaming children are the worst, especially because they’re so unpredictable. The hum of a motor pump on the other side of the field all day is a shame because it breaks the healing silence, but is tolerable because it is a stable background noise. Also: it’s one day, and then it’s over.

Barking dogs (especially those wretched little creatures) drive you crazy – although crazily enough you have people who don’t mind at all.

Hence the search for a nice house to fix up, preferably somewhere in the Algarve

In the middle of nowhere is actually a bit uninviting, and the Algarve is full of foreigners with whom you might be able to have a nice chat. And a fix-up, because retiring is all nice, but people still want to have something to do.

1 thought on “Wanted: a house to arrange in the Algarve”