This is even worse than back then with the football championship. The semifinal was between Portugal and the Netherlands. We sat in a cafe in Costa de Lavos, full of Portuguese people, all of whom were for Portugal. Of course.

I don’t have much experience with football

It just doesn’t click or something. I usually enjoy watching the people watching football. Anyway, I think it was 2004, and there we were, in that cafe in Costa de Lavos. The European Championship, I believe, and it was the semi-finals.

Correct me if I’m wrong

There you are with your solidarity feelings. I couldn’t help thinking, among other things, “Wow, what would happen if Holland wins? Will they all get mad at us? Will they beat us up in frustration?” – because yes, you do hear crazy things about football fans. We haven’t lived here that long yet, but I was confident. Portuguese are not hooligans.

I think Portugal won, so everything was okay. My party had become a bit quiet, though.

Because that’s what it’s about now, right? We were all Europeans, we started working together, and we showed solidarity. We could close the external borders if needed, and anyone could go within those limits where they wanted.

I don’t follow the news closely, but I believe that Holland (and Austria) don’t want to pay for the southerners

Because they’re party animals, who are a bit sluggish all year round, and now they want the hardworking northerners to pay for their misery

This is of course exaggerated, but I have read it here and there. The majority of lefties-journalists think it’s a shameless attitude. Of the northeners. Like the conservatives think it’s shameless of the southeners.

“While the Dutch will camp in their own country this summer (in the rain), their hard-earned euros will be allowed to go to the Mediterranean sun. At least that is the tenor around the European corona fund of 750 billion euros, about which the heads of government are trying to make a new decision on Friday in a marathon meeting. The EuropeanCommission wants two thirds of the pot to consist of gifts. The Netherlands favors loans and tough reform requirements.”

Tricky situation though. On the one hand, I understand that you don’t want to sacrifice your piggy bank for a – in your eyes – bunch of lazy bones, on the other hand, I know from my own experience that the Portuguese are definitely not lazy bones! There is a lot of hard work done here, and the 2013 crisis, for example, is almost entirely paid for by the citizens.

This resulted in years of struggling citizens who sometimes couldn’t even send their children to school because they had no money for clothes and / or food.

We were on the right track after that crisis, and now it starts again 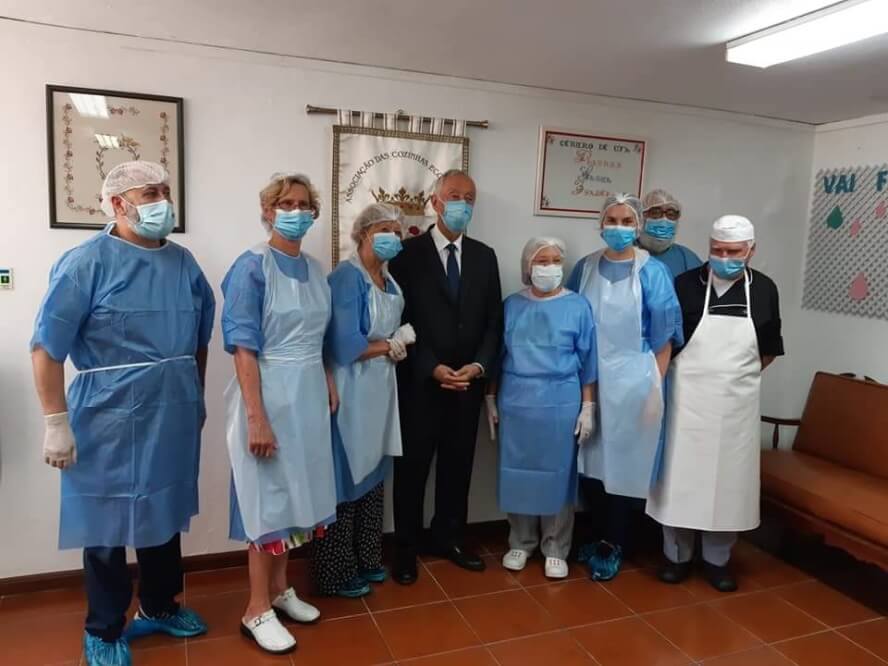 Here you can see an example of international solidarity. Marcelo * visits the volunteers of the Cozinha Económica in Coimbra – where a number of emigrated Dutch do good work every week.

And Portuguese are aware of these things, you know. If you’re actually not entitled to eat bread, because you are a sloth or a good-for-nothing, then: não merece o pão que come. You’re not going to help such a person, rather you take the bread out of his mouth: tirar o pão da boca.

It’s just different here. After their Golden Age, the Portuguese didn’t scribble up so easily – this is also due to their geographical position, for example. The Netherlands is situated a bit more favorable, between England and Germany, with France so close.

Nobody can help that, can they?

Moreover, you really do not have to take advantage of social services here. Living on benefits is about 150 euros per month. Who can live on that?

“As far as the bigger picture is concerned, it’s usually just pious words about the benefits of the internal market. According to estimates by the European Commission, it yields the average Dutch person more than three times as many euros as an Italian or Spaniard (or a Portuguese).”

Well, let’s wait and see what the great minds that lead us decide. The fate of a lot of people depends on it …

* President of the Republic Marcelo Rebelo de Sousa is widely known as Marcelo. He is incredibly popular.