Skip to content
Home » My kingdom for a horse

“Look, there is a horse on the road!” son Broes shouts in surprise, and walks towards the road in the rain to take a look. I follow him, but wait on the sidewalk for the latest news. Too cold and wet.

A horse on the road – that doesn’t happen every day!

A moment later I see an unknown man walking away with the gray and white horse. He doesn’t seem happy. Broes returns: “He escaped. But she is very skittish. I wonder if she is being treated well. ”

We both know all too well how some portuguese people treat their animals.

A few days later I drive in the direction of Soure, and see the horse standing in a swampy field, at the beginning of the adjacent village. Horses are rare here. And since the donkey has actually completely disappeared, you see very few four-hoofy animals except sheep and goats. 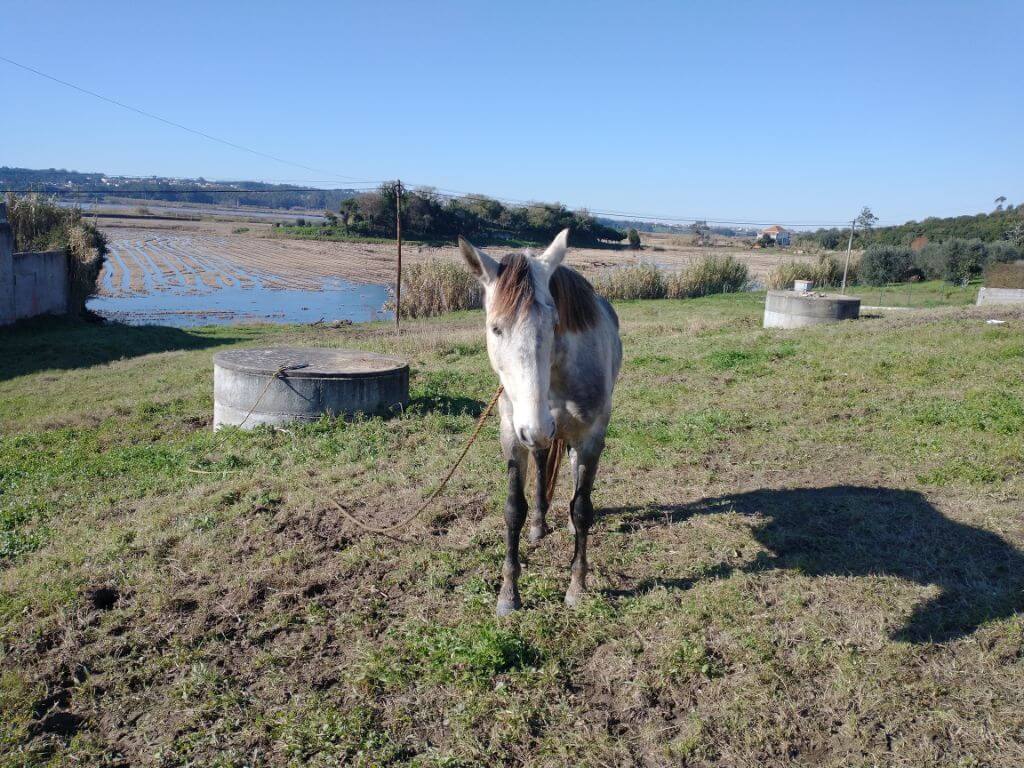 It’s a pretty little one. Slightly neglected, and certainly not too fat, but apparently not scared and not treated badly. I give her an apple and a piece of bread, and we have a nice chat. Aaaah, a horse. They smell so good. This is a smart one, it seems. But she doesn’t look that good, in this swampy meadow where not much grows in particular.

The next day the weather changes. Sunny during the day (lovely!) but that means it gets cold at night. That’s how it goes with clear weather. They are exaggerating a bit now, those weather gods, because it is even going below zero.

When I hear that I immediately think of the horse

In the evening I drive there with an old duvet. Horses are quite tough, but when it is so cold, and she has to stay outside … The neighbor opposite knows who owns the horse, but she doesn’t know much else to tell. I agree with her that when the owner of the horse comes by, she’ll call me. Then I’ll get straight to here.

That happens after an hour already! Wow, that’s fast! Okay, I throw down my gardening gloves (the sun was tempting – better do a bit of weeding) and drive over there. It’s the same grumpy man with his son. I apologize and explain that I didn’t mean anything bad with that duvet but because it was so cold … and it’s such a beautiful, sweet horse … and I love horses … and he too, it looks like …

The man is still not very forthcoming, but he talks to me while he continues to arrange his trailer. The son is quiet, he is still young, in his early twenties, I guess. The man says that the horse goes inside every day, eats 2 bags of “ração”, and that she’s enjoying the straw.

That’s nice of him to tell me, because you can also think: get lost bitch, not your business. It’s my horse, and I do what I want with that animal.

I am reassured. I’m glad it’s not a poor pathetic horse

Yesterday I suddenly saw a whitish animal on the hill, when I was poking in the campfire. Hey! The horse! On my hill! Escaped again?

I walk over and call her, “Hello, lovely! Are you coming to visit? ” The horse prickles her ears, just as she does when she recognizes my car. Told you already, it’s a smart lass.

And there is the grumpy boss too! Fortunately, he’s not at all surly now, and also has a chat. So I find out that he used to have the restaurant “A Viela”, in the village street in Soure. I know the restaurant. But yes, now of course everything is on hold.

It was worrying, he says, to survive, he started a transport company together with his youngest son. They mainly drive to Luxembourg, because a quarter of the population of Luxembourg is portuguese. 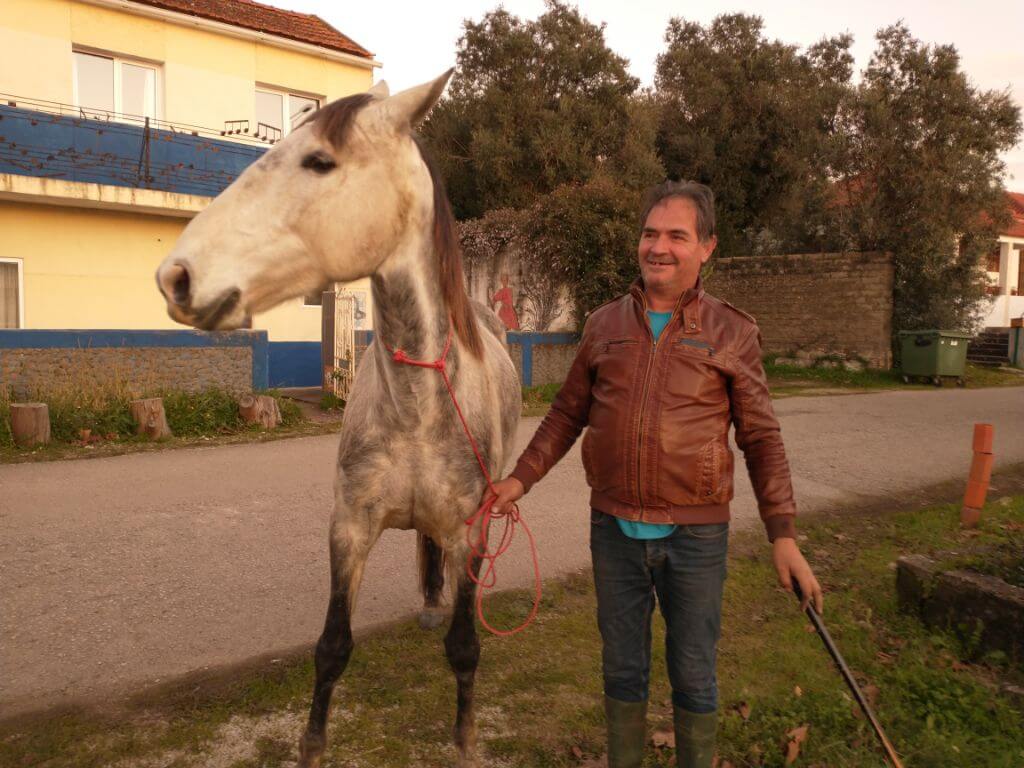 This time the transport’s going to Amsterdam. He’ll leave tomorrow

Indeed, I have seen it many times – a truck with all kinds of stuff that all kinds of people come by to get what’s theirs. One time, there was a caravan, and another time a very expensive hip sports car. They do mainly “normal” moves, or transport things that people need that they get from the Benelux.

“If I can do anything for her, just tell me!” I offer when I hear that the horse must now stay in the stable for 8 days. “And you can always come by and let her graze here for a few hours, that might be better than there. It is so wet there. Here on the hill there is much better stuff for her. ”

He notes my number on his cellphone. He will undoubtedly not call to ask for my help with Hortelã – that’s her name – because those things don’t go that way. But I hope for better times, maybe she can come and graze for a few hours.

And that’s the best of both worlds: babysitting a horse! I can be a horse nanny!