Do you know that Ikea experiment?

They’ve put two plants at the entrance of a school. The one plant received nothing but insults, swear words and misery. The other got nothing but compliments and kind words. After 30 days, the difference was obvious.

I’ve been talking to my plants for years

When I pick the arugula, I say: “Sorry, but you know… you taste so good!” I complimented the Christmas rose, which shone in the hall this winter, every day on how beautiful it was. I also encouraged her to do something about her muscle fibers, because she made so many red and green leaves ánd flowers that a few branches barely could hold the weight.

Didn’t work. One of them broke off anyway. Plants do not have muscle fibers …

One fine day Broes came home with a blueberry bush.

I thought I was smart and planted it under the kiwi. The kiwi females are already quite large, and provide nice shade on our behind-the-kitchen terrace. They do not give kiwis though; I ‘ll come back to that in a moment.

So I thought: “Tap into your intuitive abilities … okay … blueberry … it wants a little shade.”

Better to Google things straight at times than to trust your instincts, especially as an ex-city girl. Almost everything is wrong: a blueberry does not need much shade, doesn’t like clay, and doesn’t like mineral water with a pH of less than 7.

Some plants are a bit lame. Cucumbers (we usually call it cucumberus miserialus) do not like our water. Too much calcium and magnesium. The blueberry also prefers alkaline water, but it doesn’t mind our (pure, healthy, analyzed every year, wonderfully soft, did I mention pure?) mineral water.

It has been showing off a bunch of flowers and berries for a few weeks now that it is a sweet delight! It’s looking forward to the summer, you can see that! I actually don’t talk to that plant very much, because it is a bit of a 13-in-a-dozen personality.

Anyway, Broes arrived with one more. Kind of a pathetic supermarket stake. And we both had the same thought: plant it directly behind the other one, see which one likes life best!

Before the plastic, the plants catch the most sun, and they are still sheltered. We are very curious how this experiment will develop … 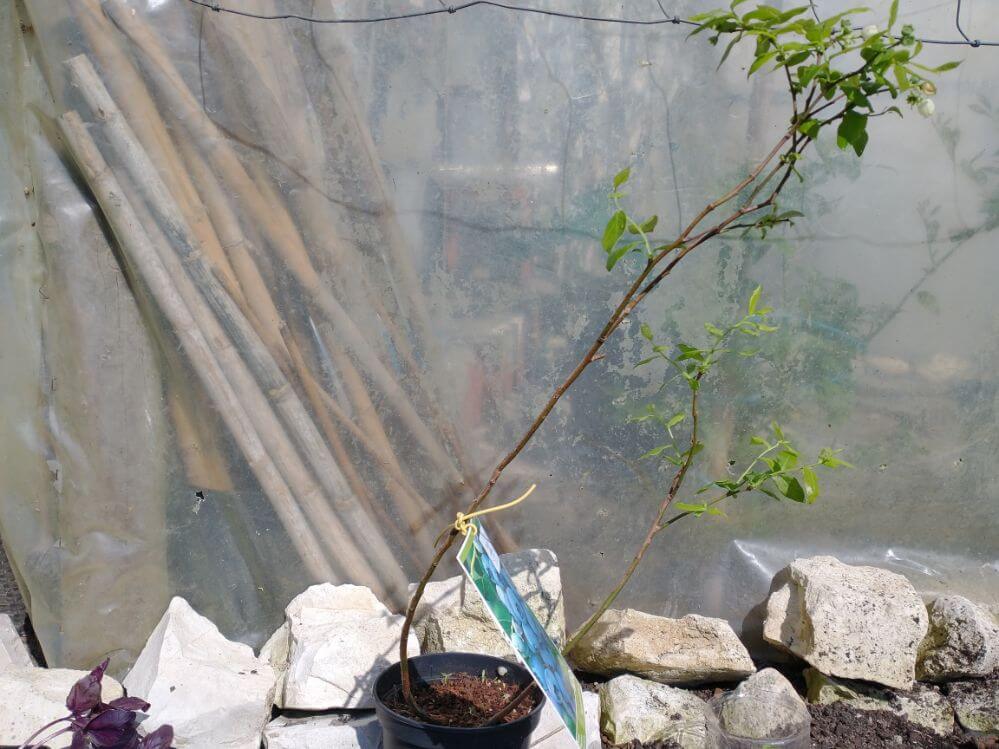 The male kiwi is right next to it. It survived the fall and winter. In winter, the two female kiwis naturally keep quiet. But now the challenge is: will it survive the snails, caterpillars, and the chatter of those two ladies? Because the three males I planted for this one were completely intimidated by those huge well-fed chicks. They saw no purpose in life anymore, and died prematurely.

I talked this male kiwi through the winter. I could call myself a “kiwi coach”, were it not for the fact that that sounds rather absurd – even though there are so many coaches in the world nowadays.

As a kiwi coach I’d say, for example: “Come on boy, you’re small but nice, you are in the best place, let them talk. Women talk until they (or you) are blue in the face, people, kiwis – doesn’t matter. Don’t worry, make your own plan, but MAKE KIWI BABIES PLEASE! ”

I’ll keep you posted. When I eat my first homemade kiwi, I’ll let you know!