Skip to content
Home » A white, a grey, or better a black car?

Cars are one of the most important things you must have in Portugal.
You will be assessed on your car. Basically the same as everywhere. Don’t you agree?

By means of your car you show who you are

I was in the Cooperativa (a shop for farm-stuff) where a talkative woman was chatting to the man behind the till about me and my purchases. She thought that I couldn’t understand Portuguese because of my foreign appearance, and she found my purchase of an ax, among other things, very remarkable.

(My beautiful red Vannettie! I still miss her!) I thought it was amusing, so I left it that way, staring at the strawberry plants as if I was a little distracted – with my ears wide open, of course.

The man behind the till was also amused, and soon asked the chatterbox: “But do you know who this is?” Well, then of course I could no longer could pretend I didn’t understand anything, and smiled vaguely at the lady.

No, she had no idea. But with such a car I probably would….

The man quickly interrupted her, perhaps to avoid worse: “This is the dona das Termas. Termas-da-Azenha” – he said, almost triumphantly. She looked a little taken aback – “but… with a car like that…. dressed like that…. ” (work trousers, crocs, simple T-shirt, long hair). That did not correspond at all with her world view.

Donas of Termases should be dressed in expensive suits, with a neat haircut appropriate to their age, and driving around in an expensive car

We almost exchanged a wink, the man from the Cooperativa and I, were it not that that would be just a bit too amicable. But we clearly both thought it was equally entertaining. 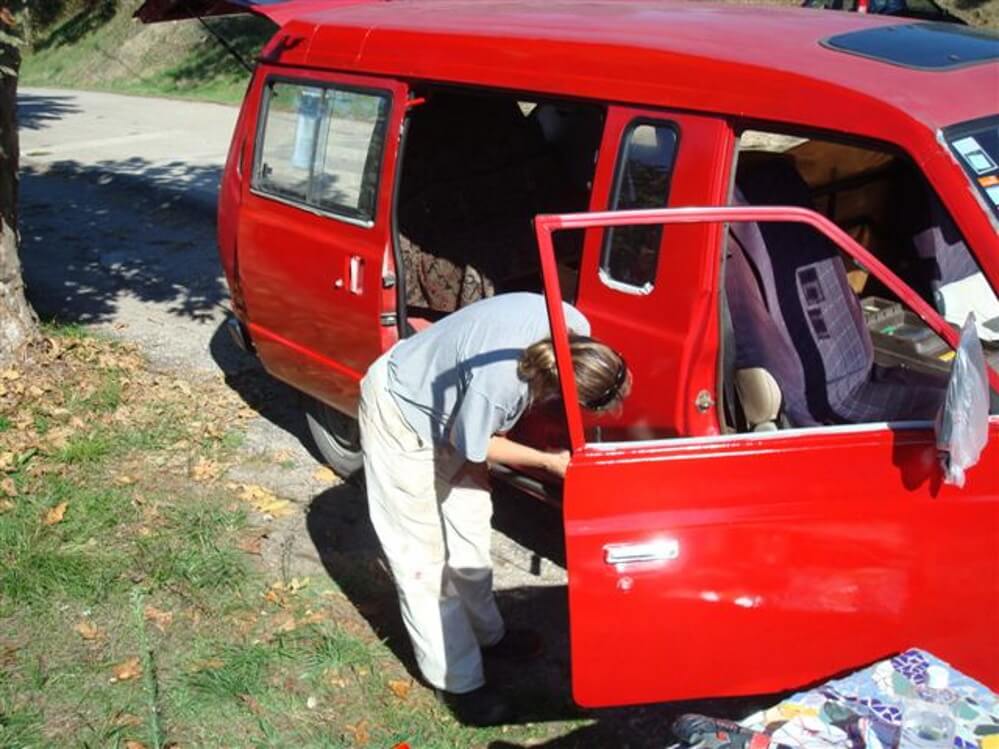 Ah, my red Vannettie! It was wiser to sell her and spend her last years somewhere in Nigeria. I hope she’s still driving there now, with her two sliding doors open to give space to all people, goats and chickens and purchases, and as AWCO*.

Last week I came back from Figueira, and saw a Mercedes van at the dealer who has a super place at the second roundabout

Such a beautiful old car, and the best thing: in mint green. Fortunately you have two roundabouts right next to each other, because my first reflex was to hit the brakes really hard. I love old vans – and this is a good one. A Mercedes-Benz 207D. 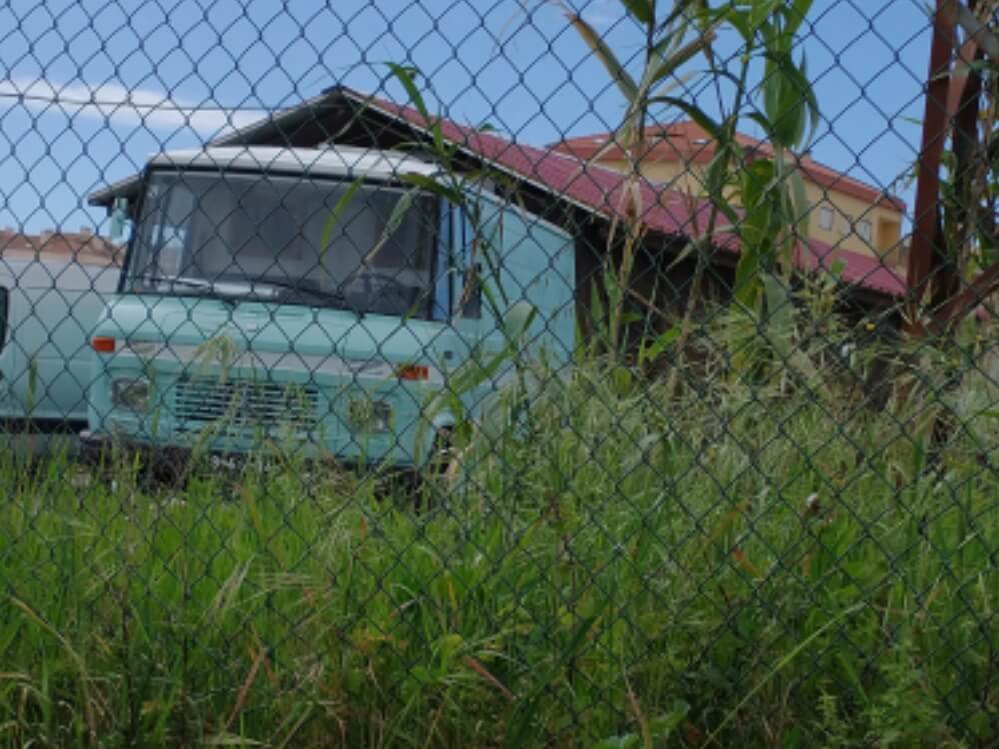 I knew an old friend is looking for a van and loves classics just like me.

Nice to send a few photos, maybe it is exactly what he’s looking for!

Impressive, such a van. Big. They’d already turned it into a camper, but very basic. Two sofas that you can use as a bed and a kitchenette in the corner. That was it. Anyway, that opens up possibilities to continue it to your own taste. A solar panel on the roof, a big sturdy steering wheel, four (!) rear tires, and it looks like nothing wrong with the motor with my layman’s eyes.

“A Mercedes is quality, isn’t it”, the dealer says proudly, “even after 40 years the engine is still fine. Always well maintained … ” Yes, you can see that, although the rubbers have dried out a bit, the car makes a radiant impression. It needs love and affection.

“I’ll pass it on” I say, because of course I have explained what I’m here for. I don’t know much about cars, but this is probably one for a connaisseur. And my friend is exacly that.

And that was exactly why my lovely little red van had to go – the maintenance was done by a mechanic we always called “Giggles” (seems clear to me why), and he was not a fast worker, nor a good organiser. After a few months without transport (he was then the only mechanic in the area), the painful insight came closer and closer.

So a van is a thing of the past for me. Too bad. Such cars still have personality.
A lot better than all that gray and black conformity everywhere … 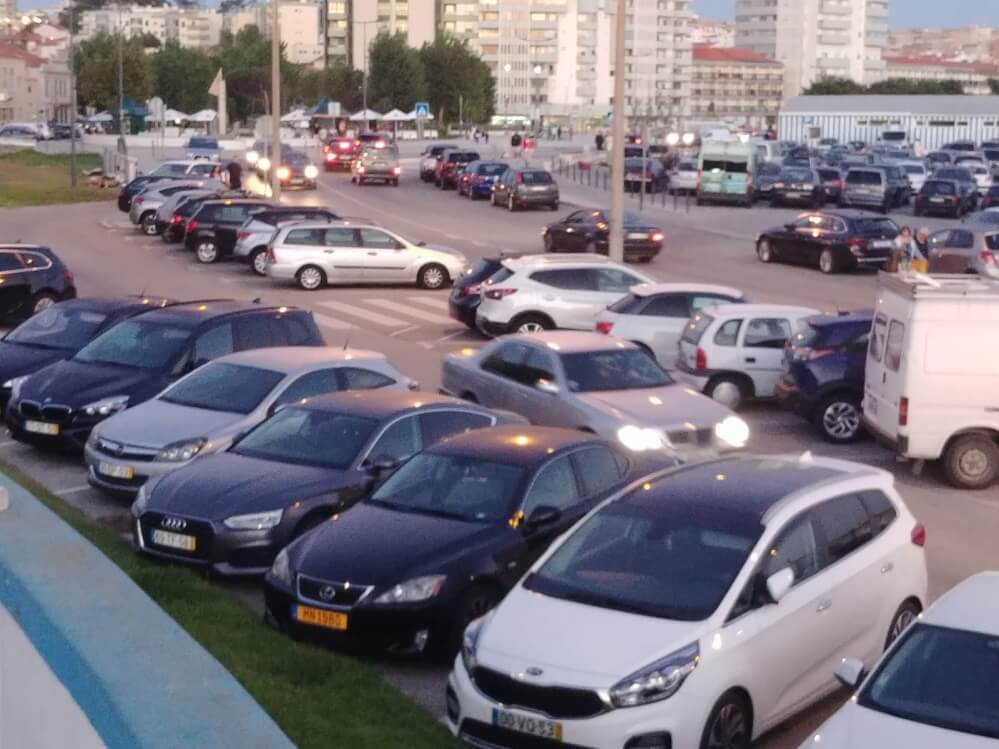 * All Windows Can Open – the first form of AIRCO